A Tale of Two Banks – Understanding the Data Problem is Key 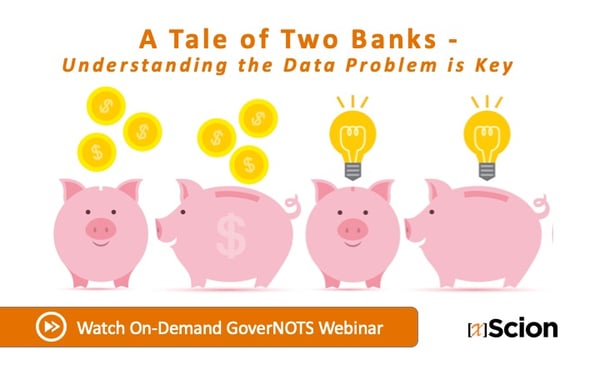 “Bias toward action” has become a popular phrase that is now even found in job descriptions. It is popularly used in design thinking and most well known as one of Amazon’s 14 Leadership Principles. However, Ashley Wilson, an Organizational Development Specialist for the U.S. Department of Justice says “beware.”  She warns against action for the sake of action. It is important that you identify the real issue and that your action is addressing it.

In the on-demand webinar GoverNOTS: 7 Assumptions Not To Make About Data Governance, expert Dick Wilson shares a story about two banks that were faced with the same challenge – becoming compliant with a new international regulatory program. Both took action and invested $1 billion to address the issue.

Bank #1 was in the news a few years later. They invested $1 billion but failed their regulatory exam. They were publicly censured by regulators who said the bank didn’t understand the problem they were trying to fix.

Bank #2 had identified the issues of concern several years before the regulators did. They had already developed a strategy at a low level of funding and their $1 billion plan was simply to pour resources into expanding and accelerating what they had already been doing. They were the first bank to comply and receive passing marks from the regulators.

Both banks acted. They both devoted significant resources, had executive buy-in and went to work addressing the new regulations. But context is important. Action for one squandered resources and time. The buzz phrase could be a “bias toward smart action.”

Wilson draws three lessons from the Tale of Two Banks:

Here is where bias for action is consistent with how design thinking works. Start where you are, start small with low cost prototype trial solutions and iterate improvements until you have something that works. In the case of the successful bank, they didn’t wait for the problem (the new regulatory program) to come to them. They anticipated it and worked on solutions. Once it became a major issue worthy of executive attention and a $1 billion investment, they were ready for smart action. The issue was identified, and a solution was in the works. It’s the difference between a reactive “bias for action” where the issues were never properly identified and addressed and a “bias for action” that includes listening to your people, identifying issues before they arise and working on solutions.

This Tale of Two Banks example demonstrates many of the features of a strong data governance program recommended in the on-demand webinar, GoverNOTS: 7 Assumptions Not To Make About Data Governance. It requires an environment of collaboration and communication to know the issues, know where you are, and where you need to be to address the issues.